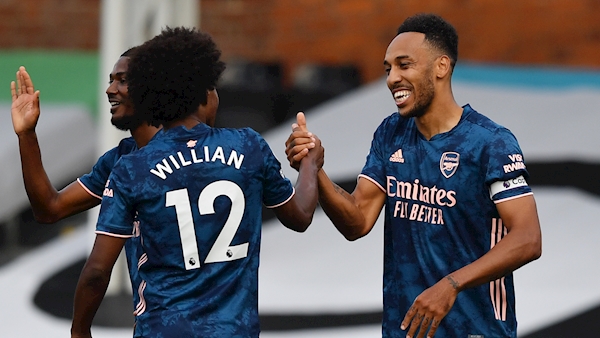 Willian registered three assists on his Arsenal debut as the Gunners beat Fulham 3-0 in the opening game of the 2020/2021 Premier League season.

The 32-year-old signed on a free transfer after Chelsea refused to offer him a three-year contract and Arsenal manager Mikel Arteta will be delighted with his new signing.

Arsenal opened the scoring after eight minutes as Alexandre Lacazette tapped in.

Moments after Fulham had a shot saved by Bernd Leno, Arsenal took the lead.

Lacazette reacted quickest following a scramble in the box to tap the ball past Marek Rodak and score the first Premier League goal of the season.

Willian hit the post but the Gunners were unable to extend their lead and were 1-0 up at the break. Fulham started the second half sluggishly and were punished for it in the 48th minute.

Debutant Gabriel rose above Michael Hector to meet a Willian corner to head home during his first match in an Arsenal shirt.

The home side were then caught almost immediately on the break and captain Pierre-Emerick Aubameyang weaved through the defence before curling the ball past Rodak to all but secure the three points for the Gunners just before the hour mark.

Goalscorer Lacazette was delighted with Arsenal’s winning start and paid tribute to the work conducted on the training ground this week.

Lacazette told BT Sport: “It was the best way to start the season. We did some good things defensively and respect what the coach wanted.

“He wants us to be perfect and we work a lot in the week for this game, because we know it’s important for the season.

“We have a big ambition and I want to help the team to be on top. I want to do my job and try to do my best this season. I’m really happy with Arsenal, I want to play and win the title.”