There’s no doubt that Whyte will have preferred to have fought Wilder before he lost his WBC heavyweight title to Tyson Fury last February, but having been defeated himself by Alexander Povetkin last summer, it’s a fight that he’d probably bite your hand off for – assuming he’s able to get the better of Povetkin in the March 27th rematch.

Whyte will once again be WBC interim champion if he beats Povetkin later this month, and when quizzed as to whether WBC would be open to the idea of an eliminator between the Englishman and Deontay Wilder for a shot at winning the WBC heavyweight belt, Mauricio Sulaiman is quoted by Sky Sports saying the following:

“Yes, that could be a very interesting match-up.

“Unfortunately we are not promoters, we are not match-makers, but this could be potentially a very interesting fight.

“There is great talent in the heavyweight division and I am sure that we are up for a great ride in the coming years. We have so many combinations that can happen.”

“Of course the excitement of Fury and Joshua is what everyone is talking about, but there are also many other fights that could potentially take the great entertainment for the boxing fans around the world.”

It’s difficult to see this as anything other than a make or break for Whyte and his career. After multiple forward strides following being knocked out by Anthony Joshua in 2015, he’s at risk of undoing all of his good work by falling short against Povetkin. 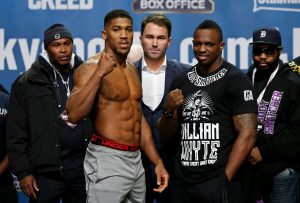 There can be no doubting that a heavyweight title shot is what Whyte wants, and has wanted for some time now. Beating Povetkin later this month would be a considerable step towards achieving that.