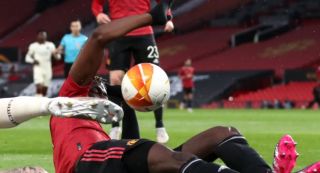 This is surely a joke at this stage, where else is Paul Pogba suppose to put his arm? Extremely harsh and thing will have to change with VAR next season. Manchester United are currently trailing Roma two gaols to one at Old Trafford in the first leg of their Europa League semi-final.

Ole Gunnar Solskjaer is yet to get to a final and win a trophy with this Manchester United something that he is eager to set right. Still along way to go in this game and of course the second leg to come in Rome.