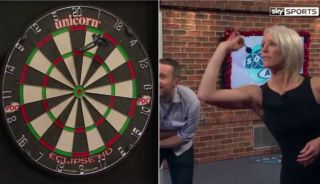 Chamberlain was up against fellow host Max Rushden and the sports mad presenter put on an extremely impressive display.

She began with two ‘treble 20’s’ notching up an instant score of 120 and was unfortunate not to get 180 after the last dart bounced out.

That wasn’t her best score though as Chamberlain returned to the oche and banged in a perfect 180 giving her a total score of 300 and an almost perfect game.

Chamberlain was a pub-league level darts player when she was younger and claims to have once beaten Eric Bristow in a game of darts-cricket.

She also finished second in the 2005 Poker Million tournament winning $400,000. She spent the money on a Range Rover for her boyfriend and the racehorse ‘Birkspiel’ for herself.

On his first outing Birkspiel won Chamberlain €50,000 in a Group 3 race in Baden-Baden, Germany.