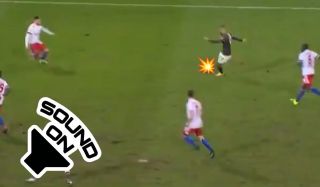 Check out this absolute cannon of a goal by St.Pauli striker Daniel-Kofi Kyereh which secured victory for his side in the 88th minute of the Hamburg derby.

The game finished 1-0 with St.Paili coming out as victors after the German-Ghanaian thumped the ball home after the ball broke in the Hamburg box.

The finish was impressive but the sound the net made when Kyereh nearly burst it, is one of the most satisfying noises in football.

Daniel-Kofi Kyereh literally rattled the net as St.Pauli’s wonderful Bundesliga 2 form continues after the 24-year-old handed his side another three points.

St.Pauli are still a way off promotion as they sit in 11th spot, a whole seven places behind their rivals Hamburg who are in fourth spot following their defeat.

St.Pauli win the Hamburg derby in the 88th minute!

A thumping strike from Daniel-Kofi Kyereh and just listen to that sound when the ball hits the net 😍 pic.twitter.com/9reuPPENqO 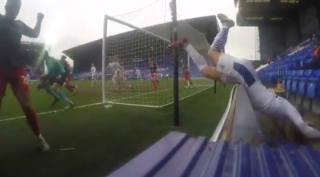