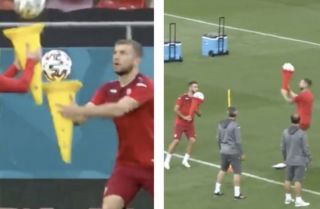 North Macedonia – the lowest-ranked nation in this summer’s Euros 2020, have caught fans’ attention after participating in a strange pre-match warm-up session.

Preparing to face Ukraine in their second Group C match, North Macedonia, who currently trail 1-0 thanks to an Andrey Yarmolenko goal, are candidates for an early exit.

During the build-up to their match against the Ukraine, the squad were spotted engaging in a rather unique (and a bit weird) pre-match training session.

The session included players using traffic-style training cones to catch a ball in – Okay, then.