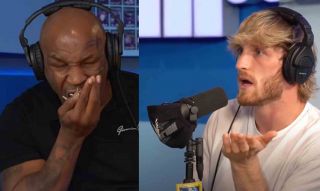 Check out this wild video of ‘Iron’ Mike Tyson horsing into mushrooms and weed like they’re going out of fashion on the Logan Paul podcast ‘ImPaulsive’.

Tyson began the show with a healthy sized joint and was smoking even before he was introduced and he then chowed down on four or five grams of mushrooms which were handed to him by ‘imPaulsive’ co-host Mike Majlak.

During the conversation Tyson revealed that he believes mushrooms are “going to be the best thing in the 21st century and taking them “helps me be a better me”.

He also said that he may have taken some mushrooms a few days before he returned to the ring for the first time in 15 years last month and a psychedelic ‘named ‘The Toad’, helped with his incredible weight loss in the build up to his comeback.

The podcast finished with the group watching the viral video of a man punching a kangaroo as they discussed Tyson fighting different types of animals such as a Gorilla if he came across one in the jungle.