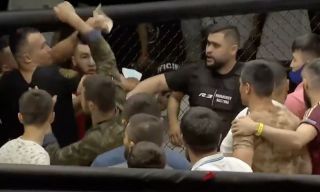 Well, if truth be told – we have absolutely no idea what is happening here but it makes for some great viewing!

During Russian MMA promotion ‘R3’, two random bystanders appeared to find themselves inside the cage.

It is not known if they’re in any way related to the promotion’s fighters, however, following an altercation, both men engaged in a physical back and forth.

As the chaos died down, it quickly became apparent that there was only one way to truly settle the debate – FIGHT!

That’s right, taking a short break to gear up, both men were there granted permission to scrap it out in the cage.

Chaos at R3 Fighting Championship in Moscow. No idea what’s going on, but these things happen in Russian MMA. pic.twitter.com/OKnUTa7Zho

If this was happening in any other country I’d say it was fake but nope, these dudes are actually fighting right now. pic.twitter.com/u7Tu0yNyVw