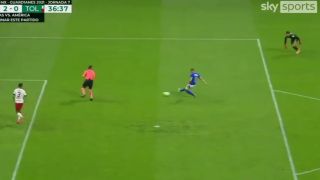 Cruz Azul faced Toluca yesterday in the Liga MX and referee Oscar Macias Romo managed to produce the highlight of the game as he turned into prime manuel Neuer to stop Cruz Azul’s shot from going into the back of an empty net.

Toluca’s keeper ran out to try and tackle the Cruz Azul forward but missed the ball and left the net completely free.

Cruz Azul’s first shot hit the post and they were left with a follow up shot into an empty net but Romo ran into the box and managed to block the shot.

He seemed to disinterested with Azul’s complaints and shrugged the blunder off.

A Liga MX referee became the highlight of clash between Cruz Azul and Toluca by accidentally blocking a goal-bound shot… pic.twitter.com/70TrsXObtV

He was lucky that Cruz Azul went on to win the game 3-2 anyway so this save didn’t change the game completely.