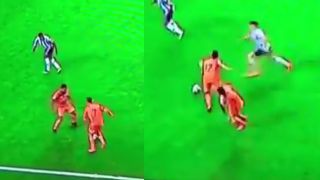 Alex Sandro has proven today that he might still value his old team Porto with a poor performance against them in the Champions League for Juventus. The left back tackled Juve’s star player Cristiano Ronaldo as he tried to make a break down the left wing.

When Ronaldo tried to make a break down the left wing it was Brazilian defender Alex Sandro to stop him as Cristiano made his best attempt to bring back the game they were 2-0 down at the time.

Juventus went into the game as clear favourites but after a massive blunder from Bentancur it seems like the players are playing against their teammates.

Will Juventus be able to bring this back in the dying minutes and salvage some away goals or is it too late?

If you're chasing a game, don't get in a teammate's way…

Especially if that teammate is Ronaldo! 😤

Alex Sandro sums up a disappointing evening for Juve 😔 pic.twitter.com/COou2DoQsY

Pictures courtesy of the Champions League

Alex Sandro will be receiving some stern looks from Cristiano and Pirlo in the very next training session in Turin.