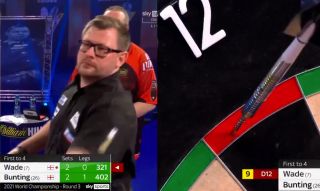 World no.7 James Wade hit nine perfect darts against Stephen Bunting at their World Darts Championship Round 3 clash at the Alexandra Place on Tuesday.

The Englishman then returned to the oche with 141 left which he too out easily timing up the game at 2 sets and 1 leg each.

The first nine-darter at Ally Pally for five years!

It wasn’t enough for James Wade though as Bunting went on to win the set while also taking the lead for the first time.

Bunting went on to win the next set also clinching the game 4-2 and booking his place in the last 16 of the competition.