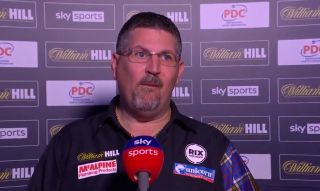 World number 13 Gary Anderson slammed Mensor Suljovic for his slow play and mind games during their world darts championship round 3 match claiming fans watching at home would have been better off if they “watched Corrie or something.”

It all began when Suljovic setup at the wrong table before the game despite being told by officials which one he was to be stationed at before the game.

Suljovic was then accused of deliberately slowing up the game to upset Andersons rhythm which unfortunately for the the world no.20 didn’t work as Anderson battled back from 3-2 down to close out a 4-3 victory.

Gary Anderson offers his take on how his match with Mensur Suljovic played out.

During his post match interview with Sky Sports Gary Anderson hit out at Suljovic saying: “Absolutely dire, an absolute joke of a game. Everyone says ‘why do you get cheesed off with darts?’, that’s one of the reasons. Absolute bull.

“For a start, we were told what tables we were on and I ended up on the wrong table for the duration of the game.

Despite coming away with victory Anderson admitted that he felt sorry for the fans watching at home and he would not have blamed them for changing the channel.

“I nicked it at the end,” added Anderson. “I don’t know how but if that’s how darts is going then I’m off – I’m away for a game of golf or something. I’m not going through that again.

“Did you watch the last set? Or the third set? Was he slow then? No he wasn’t.

“I just want to play darts. I’m sure there are 90% of folk watching at home, they probably turned over and watched Corrie or something – I would have.

“There’s a lot of things that go on now, I just want to throw darts and if you get spanked, the boy’s been better than you and beaten you – shake his hand and on you go.

“But that’s a load of tripe. I feel sorry for the folk who watched it.”