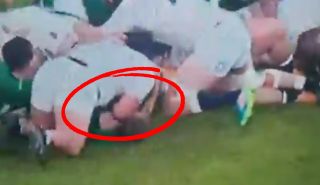 England rugby’s Ellis Genge will find himself in a spot of bother after this incident towards the end of the Ireland v England game. See it for yourself but it looks like the Englishman is seen punching Irish Out-half Jonathan Sexton on the ground.

Ireland ran out winners 32 points to 18 at the Aviva Stadium in a very impressive display from Andy Farrell and his men. Although neither side could win the Championship there was still a lot to play for including possible Lions pleases(provided the tour goes ahead)

Ireland can be expecting to have a lot of players on the plan to South Africa with that display today. It was definitely Andy Farrell’s biggest win yet in his coaching career and a long time coming. There’s definitely a lot to work on, but Ireland and Andy Farrell can look back on a rather successful Championship. Bring on next years Six Nations Championship.