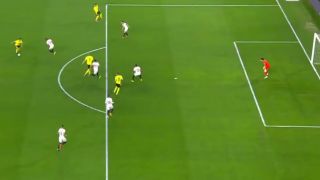 Sevilla scored the opening goal in the 7th minute thanks to a Suso strike but Dahoud was able to level the game in 19th minute through a brilliant strike.

The German midfielder picked up the ball near the middle of the pitch and was able to strike the ball from outside the box and to curl the ball around the keeper and into the back of the net.

Yassine Bounou didn’t stand a chance with the ball being hit so sweetly. Dortmund have dominated the game since then and are now two goals ahead going into the second half thanks to an Erling Haaland brace.

What a strike from Dortmund's Mahmoud Dahoud! 🚀

Some way to score the first #UCL goal of his career! 👏 pic.twitter.com/AdnYG8vxme

Will Sevilla be able to bring this game back and secure a home win in their Champions League Round of 16 tie?