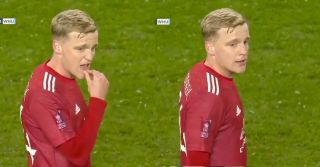 Manchester United advanced to the Quarter-finals of the FA cup this evening against a stubborn West Ham United at Old Trafford thanks to a Scott McTominay goal in the first period of extra time. But one of the sadder moments of the game was for Dutch midfielder Donny van de Beek he was given a rare opportunity to impress after being named in the starting line-up by Ole Gunnar Solskjaer.

But once again the 23-year-old was virtually a passenger for the majority of the game, and was substituted for Bruno Fernandes in the 73rd minute.

The statistics summed it up, with Van de Beek failing to create any chances and managing just one shot in his time on the pitch.

Just look at his face in the video above, poor fella. Ole Gunnar Solskjaer is doing an good job at Old Trafford, but the day will come when he will have to do an excellent job, because that club demands trophy’s