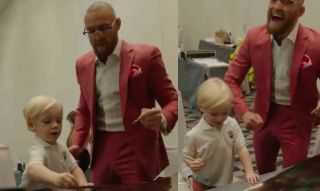 Check out this wonderful little moment between UFC superstar Conor McGregor and his son Conor Jr. after the official UFC 257 press conference on Fight Island.

Conor McGregor and Dustin Poirier are set to meet for a second time since the pair faced-off for the first-time at lightweight all the way back in 2014.

UFC 178’s hugely exciting match-up saw McGregor come out victorious in a ‘performance of the night’ win that later helped propel the superstar to Featherweight glory.

However, with both fighters now back at 155lb January’s main-event has the potential to have some huge implications in the race for the title.

After pound-for-pound great Khabib Nurmagomedov retired after his recent win against Justin Gaethje, the UFC’s most stacked division is looking for it’s next champion.

After their press conference McGregor was fulfilling some of his contract obligations such as signing official poster for some lucky fans.

Well, a handful of fans are going to land themselves a unique poster as they will be the first ones in history to feature not only ‘The Notorious’s’ signature but his son Conor Jr’s also.

They’re probably not worth much now but they may fetch a few quid in the long run, who knows?

Nothing can shake their family bond ❤️

Dive a bit deeper with @TheNotoriousMMA on our third episode of Embedded: https://t.co/Hjv1Mhqg7u 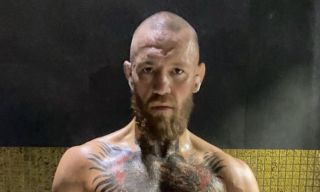