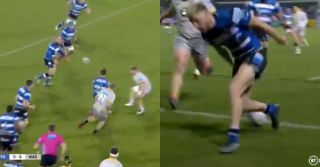 Bath went down to 44-52 to London Wasps last night it what was a cracking game, just look at that for a score 44-52 it was a night where defence’s went out the window and attacking rugby was the winner. Bath set the tone at the start of the game, with a cracking try to kick off the game just over two minutes in. Deep inside their own 22 the passing the shimming and the pass were incredible by all, watch it here;

Wow! What a stunning team try from @BathRugby 🔥

Tom de Glanville showing his class and then through the hands for Rhys Priestland to touch down!

Bath are currently 7th in the Gallagher Premier ship table and could badly done with the win to move them further up the table, but at least they got a try bonus point for the four try’s. It’s all very tight at the moment in the Premiership though and a few wins could have you in a different position in no time. Exeter & Bristol are the two at the top and the ones too catch and anyone would fancy their chances at present with how tight it is on the table.