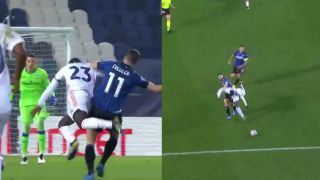 Real Madrid were handed a lifeline in the 17th minute as Atalanta’s Freuler was given a straight red card after a controversial decision from the referee.

Freuler fouled Ferland Mendy just outside the Atalanta box and referee Tobias Stieler felt he had no option but to send off the Atalanta player.

Real Madrid will be looking to capitalise on this and score some much needed away goals in this Champions League clash.

Remo Freuler is sent off for denying a goalscoring opportunity after tangling with Real Madrid's Ferland Mendy on the edge of his own penalty area! 🔴 pic.twitter.com/eVdMS1bYbB

Was this stopping a clear goal scoring chance as Atalanta’s goalkeeper seemed like he had the attack under control after a bad touch from Mendy?

Was it a harsh decision for the ref?