Holohan, who topped the bill following injuries to Joseph Duffy and Stipe Miocic, had no complaints after Hawaiian Smolka handed him the second loss of his five-fight UFC career. It is an untimely setback as there was talk of the 27-year-old being on the road to a title shot in the near future.

The Dublin flyweight was submitted by a rear-naked choke at 4:09 in the second round, a move that he had very nearly pulled off a short while earlier. Unfortunately for the eager crowd, Smolka escaped and after catching Holohan with a series of strikes, he took his back and forced the tap-out. 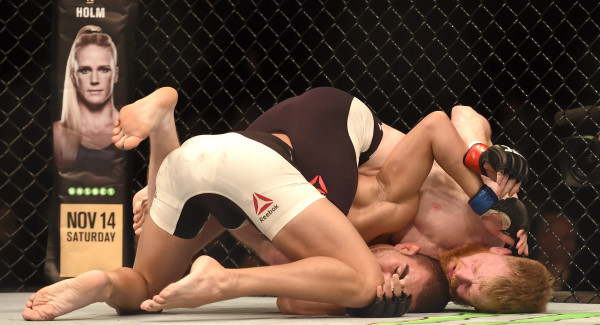 Giving his reaction in the aftermath, ‘The Hooligan’ admitted: “I never said I was the best or that I was born gifted, but when I do come out I give you everything. This week has been crazy. Hats off to Louis, he came here and beat me in my own back yard.”

Holohan was one of five Irish fighters in the octagon on the night, with Antrim lightweight Norman Parke and 36-year-old flyweight Neil Seery from Dublin both picking up deserved wins on the main card.

Paddy Holohan classy in defeat. What a guy. #UFCDublin

Parke and Swedish wrestler Reza Madadi left the talking behind them in their tense bout, the Bushmills man bouncing back from two defeats earlier this year to take a unanimous verdict – 30-27 across the three scorecards.

It was Parke’s crisper striking that put him in front in the opening round and with Madadi’s last fight some two-and-a-half years ago, his opponent’s superior conditioning came to the fore with a result-clinching takedown late in the third.

The very popular Seery delighted the home support with a second round submission of Guam fighter Jon Delos Reyes. The win took his UFC record to 3-2.

Both fighters attempted guillotines in the first round but to no avail. Seery tried the same move early in the second, and it eventually came off at the 4:12 mark when Reyes left himself exposed following an attempted takedown, and ‘2Tap’ locked on with a textbook guillotine that brought this frantic fight to a close.

We're proud of you @PaddyHolohanMMA , and we know you'll be back stronger than ever in the near future! #UFCDublin pic.twitter.com/jYW5lfA7fJ

In the prelims, Cathal Pendred was left bloodied and well-beaten by impressive English welterweight Tom Breese who scored a TKO victory in the first round.

Suffering his second successive defeat (4-2), Pendred’s solid start was ruined when Breese landed a powerful left hook. With his nose bleeding, the Dubliner left his guard down again as the unbeaten Breese continued to connect with accurate left hands to the face.

A hard kick to the body chipped away further and Breese followed up with two straight lefts to put Pendred down, while some more punishment on the ground forced the referee to step in at 4:37.

The Drimnagh strawweight, who is part of the Straight Blast Gym set-up alongside the likes of Holohan, Pendred and the watching Conor McGregor, seized the initiative with a takedown and barrage of blows late in the first round.

Almeida came back strongly in the second, attempting a rear-naked choke and landing some forceful punches from her position behind. But Daly was on top in the closing stanza, connecting with some meaty early strikes before getting her opponent on her back and she was the dominant fighter to the finish.

Daly said afterwards: “That was one of the best moments of my life. These are the best fans in the world and that crowd was absolutely phenomenal. I could hear the crowd all singing along to my walkout song (‘Zombie’ by the Cranberries) so that was really emotional.

“And to hear all that support during the fight, it was just the most amazing, memorable fight of my life. Thanks to Ericka for coming over and enjoying that with me. I’m open to anything next. Let’s do it. But whoever gets me next is going to be sorry.”