There are three certainties in life: death, taxes and Tottenham Hotspur being the butt of the joke. In this case, they’ve found themselves being mugged off by a paint company, one which had just announced a new partnership deal with them.

While we all love to have a dig at Tottenham, with many Spurs fans themselves becoming pretty sound when it comes to the art form of self-mockery, you wouldn’t expect a company who has just penned a sponsorship deal with the club to be taking the mick on social media.

Yet, Dulux, have done exactly that.

Let’s start at the beginning, with Spurs announcing their deal with the paint company, via a picture of an Old English Sheepdog at the Tottenham Hotspur Stadium, with the breed of dog becoming synonymous with Dulux as a brand.

We are delighted to announce @duluxuk, the nation’s number one paint brand, as our first ever Official Paint Supplier.#THFC ⚪ #COYS

While the Tottenham Twitter admin managed to remain professional throughout the announcement, whoever was in charge of the Dulux’s account didn’t, and may well have got themselves the sack as a result.

Have a look below at some of the (now deleted) tweets sent out by the official Dulux Twitter account in wake of the announcement of their deal with Tottenham. 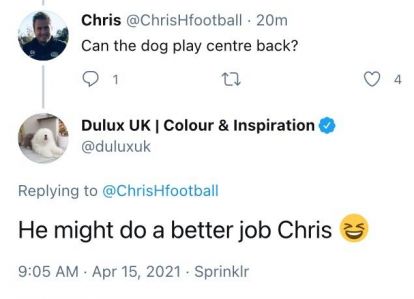 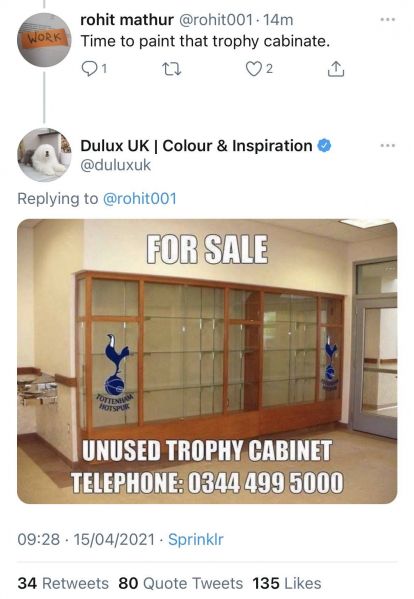 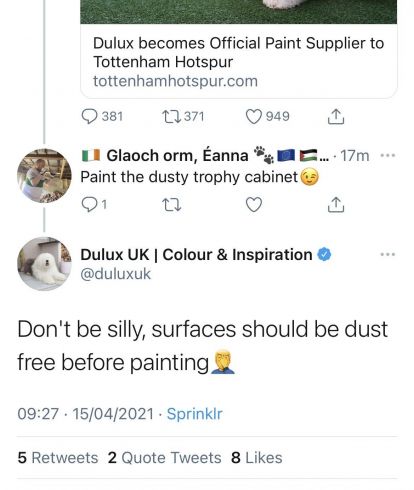 Armagh Player at the Centre of Disgraceful Incident is Said to be ‘Deeply Regretful’
Former Justice Minister Calls for the Gardaí to Investigate the ‘Disgraceful Incident’
(Video) Jake Paul sends warning to Tommy Fury after U.S authorities deny access to the country

From a professional standpoint, what on Earth were they thinking? This could prove to be the shortest sponsorship deal in history, because you have to imagine Daniel Levy is going to be left FUMING by this.

From a non-Tottenham fan standpoint, hats off to you, Dulux, you win the Internet today.