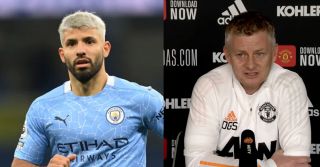 The Norwegian boss of Manchester United was talking ahead of the Red Devils clash with Brighton & Hove Albion at Old Trafford on Sunday evening in the late kick-off. Solskjaer spoke of the possibility of Sergio Aguero moves over to the red side of Manchester United from the blue side…

“When I played for Man United, if a rival club would try to sign me and I’d gone to a rival club, where’s the loyalty?”

“Of course, loyalty is one of the values I rank highly. So, I wouldn’t expect any player who had played for a club for 10 years to want to go to a local rival.

“We’ve had examples of that – and I didn’t really agree with it. I won’t name names but you all know who I mean. Enough said.”