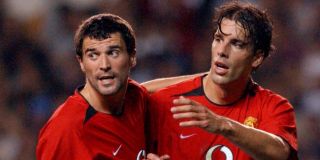 The former Dutch and Manchester United striker Ruud van Nistelrooy tells of the reaction he and some of the others players had when the Manchester United captain left the Old Trafford club after a bust up with Sir Alex Ferguson.

“In the first three months, he [Keane] was so on top of me,” Van Nistelrooy said on the UTD Podcast. “Everything I did, he was like; ‘do this, do this’.

“After one month, I thought it was going to stop but it took a few months! Scoring my first goals, he was like; ‘yeah you scored, but it’s on to the next game’.

“He kept your feet on the ground. It’s not always nice to hear.

“I snapped at him and was like; ‘for once, just shut up’.

“In the end, you look back on it. [During] my time at United, he always led by example and never took anything for granted himself.

“It’s not always nice, but he was right, and I was actually shocked when he left. I was really disappointed with that.”

“The core of it was United through and through. That’s what you could feel when you came into it,” Van Nistelrooy explained.

“Of course, there was Gary [Neville], Phil [Neville], [Paul] Scholes, Butty [Nicky Butt], Maysie [David May]. They all were part of that British-English core. There were Mancs everywhere!

“There was also Roy Keane, a very strong influence in that dressing room together with the group I mentioned.

“As a newcomer, you knew you had to adjust to that culture and that’s what made the dressing room. That’s why the dressing room is so important, to keep the values and the culture of the club alive.

“Also, the kitman Albert [Morgan] and the staff around it were United. That was the culture of the club. That’s why they were so successful in all those times and, hopefully, they’re now starting a new era of success.”