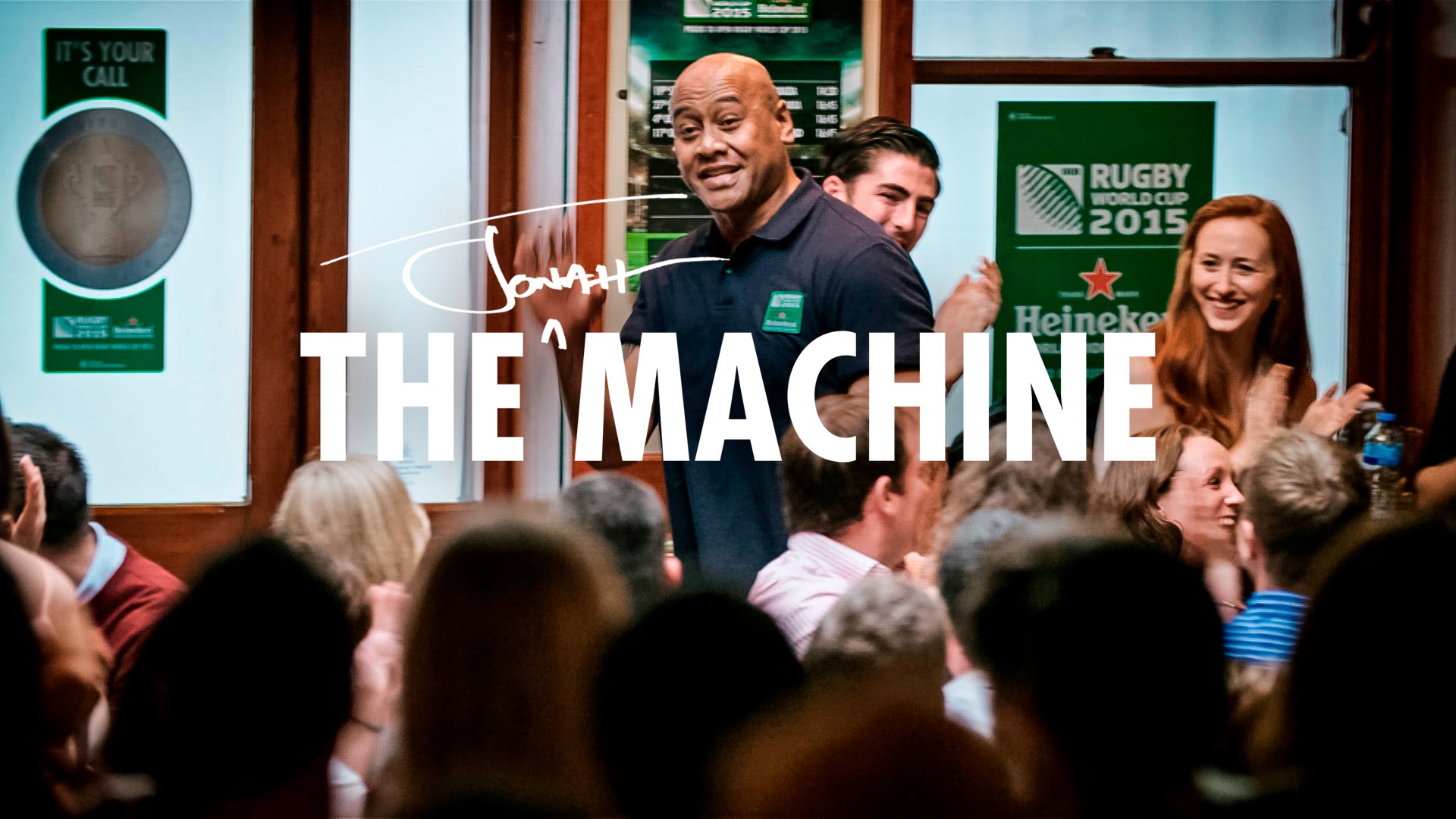 Excellent from the boys at Heineken

Recent visitors to Dublin’s Harry Byrnes pub encountered an unexpected guest in the form of all-time Rugby World Cup record try-scorer, Jonah Lomu. The Kiwi great, whose 15 tries in the competition propelled him to worldwide stardom during an illustrious career, had a surprise or two in store at the Clontarf venue, in his role as an official HEINEKEN ambassador to help launch the ‘It’s Your Call’ Rugby World Cup 2015 campaign.

The exciting campaign gives rugby fans the once-in-a-lifetime opportunity to be at the pre-match coin toss at an Ireland match during the tournament this autumn, right next to the team captains, moments before they do battle. All Irish rugby fans have to do to be in with a chance of winning one of these world-class prizes is enjoy a Heineken® at participating pubs and off-licences. Here, they are given a coin with a code on it. They simply use the code to play an online coin-flip game where they could win one of thousands of pieces of official merchandise, or it could lead them all the way to the coin-toss at an Ireland game at Rugby World Cup 2015.

Guests at Harry Byrnes were the first to get a taste of the unpredictability of the coin flip, with Lomu hiding inside what they thought was a regular vending machine, and offering up some customised gifts that left everyone scratching their heads. Ireland rugby hero Shane Horgan was on hand to reveal the true identity of the contents of the vending machine – much to the surprise and amusement of our rugby fans!

World Cup legend Lomu said: “This HEINEKEN video was a lot of fun to shoot! The Irish are known for their sense of humour across the world, so I was delighted to put that to the test. Seeing peoples’ faces as they tried to figure out what was going on was a real highlight.”

Mark Crosbie, who was at Harry Byrnes for what he thought was simply an introduction to HEINEKEN’s new Rugby World Cup coin toss mechanic, revealed: “Everything was perfectly normal until people started receiving personalised merchandise from Jonah Lomu. A few people in the pub began questioning whether he was in fact in the building, but we all still got a huge surprise when Shane Horgan walked over and let him out of the box. He’s a big man, I’ve no idea how he fitted into it!”

HEINEKEN Communications Brand Manager, Conor McIntyre, said: “HEINEKEN is proud sponsor of Rugby World Cup 2015, and we’re extremely excited to announce the new ‘It’s Your Call’ campaign. It promises to give rugby fans some world-class experiences during what is set to be the biggest edition of the tournament to date. Of course, in true HEINEKEN fashion, we decided to have a little fun with the launch, and put some unsuspecting rugby fans to the test, with one of the tournament’s most legendary players!”

Want the opportunity to win some unique Heineken experiences during Rugby World Cup 2015? Visit www.heineken.ie to find out how. It’s Your Call.