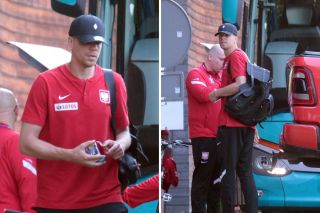 Polish international Wojciech Szczesny was pictured puffing on a cigarette just a matter of hours before facing Spain in the Euro 2020 group stage.

While goalkeepers are not necessarily required to have equal fitness levels to their outfield counterparts, they can hardly be allowed to be munching on cheeseburgers for breakfast.

That is, unless you’re Chelsea icon William Foulke, in which case you can do whatever you like.

While Juventus and Poland keeper Szczesny is not visibly overweight, certainly not comparably so to ‘Fatty’ Foulke, as they used to call him, he may not have the healthiest set of lungs in the game.

As is reported by the Daily Star, just a matter of hours before taking to the field against Spain, a game which the Poles earned themselves a point, Szczesny was pictured smoking a cigarette.

It’s certainly not conventional for players to be cigarette smokers in this day and age, but as is mentioned in the Daily Star’s report, the former Arsenal stopper has previously admitted to being a smoker.

In fact, he was once fined by Arsenal manager Arsene Wenger for lighting up a fag in the dressing room showers, as has previously been reported by The Sun.