Two unlucky Tottenham fans travelled for 31 hours all the way from the United States only to discover that Spurs’ clash with Burnley was OFF.

Spurs’ tussle with Burnley was postponed at the eleventh hour after heavy snowfall in the area made conditions both inside and outside the stadium treacherous.

It’s unusual for Premier League games to be postponed for adverse weather conditions in this day and age, but ultimately the health and safety of fans and players is paramount.

Still, that’s not going to make these two hugely unfortunate fans feel any better after they travelled for 31 hours from Dallas, United States, to watch Spurs in action against Burnley. 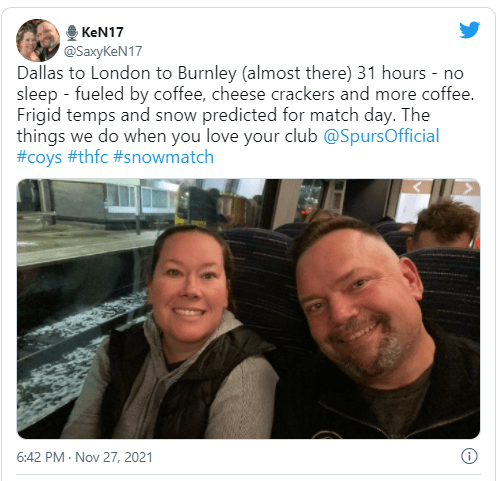 We can only hope that they’ll be able to alter their plans and stick around until Tottenham take on Brentford on home soil on Thursday, else this really would have been a wasted trip.

Considering how much they will have spent on travel to get from Dallas to Burnley, it’d be a nice idea for Tottenham to provide them with some form of compensation…