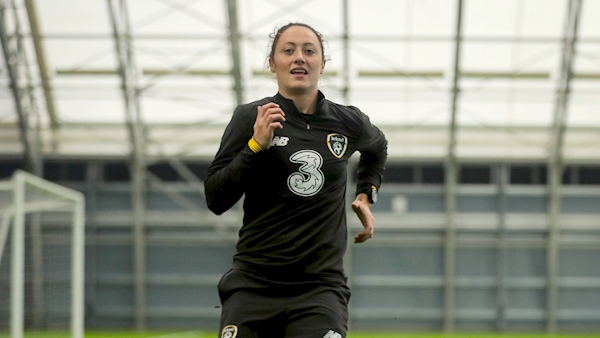 For most of us, our lives were turned upside down by the Covid-19 pandemic.

For Megan Campbell, her life was turned upside down – and then the pandemic struck.

The 26-year-old Manchester City defender is one of Ireland’s best-known footballers, an accomplished defender who has been capped 33 times for her country as well as earning international recognition for her spectacular long throws.

But the Drogheda native has also suffered more than most for her sport, enduring a number of serious injuries – including a long-term cruciate knee injury in 2017 – which, cumulatively, have taken a big chunk out of her playing career.

Little wonder then, that when she suffered what turned out to be a potentially career-ending ankle injury in January, she made no attempt to mask her sense of devastation when announcing the news on social media.

“Another road to recovery and one I never thought I’d her have to experience again,” she said at the time.

For me, it’s hard to sit here and wonder why I find myself in this position again. It’s hard to constantly get back up and keep bouncing back…

So it feels good to be able to report today that when I make contact with Megan at her home in Manchester, she is further along that road to recovery and determined to accentuate the positive as she continues to target a comeback for club and country.

She sustained the injury playing against Spurs in City’s first game back after the WSL Christmas break.

Overlapping down the flank, she put her weight on her right foot, planning to cross with her left, when she felt “a crunch and sharp pain shoot up my right ankle.”

Initially, there was some false hope when an x-ray showed nothing broken but, as she struggled even to walk, there followed a succession of inconclusive assessments by doctors and specialists as well as numerous scans to try to get to the bottom of the problem.

All of which led her, eventually, to surgeon James Calder, in London.

“I went down there hoping for the best news possible,” she recalls, “which is that I wouldn’t need surgery and it would be something that could be rehabbed on its own.”

Unfortunately, further investigation of what proved to be a complicated injury had revealed that she had, in fact, ruptured a tendon in the ankle. And she was told that if she hoped to play football again at an elite level she would have to undergo another operation.

“It was heartbreaking to hear that news,” she says. “After what I’d been through with the ACL, I had to ask myself, ‘do I carry on or do I retire?’”

The surgeon also told her that the unusual nature of the injury was something he had rarely come across in young athletes. He had, in fact, only performed the operation twice on footballers. For one, who was nearing the end of his career, it had proved unsuccessful. But for the other, a younger man, it had enabled him to get back to playing at a good level.

“I thought, ‘that gives me a 50-50 chance of playing football again,” Megan says, “and I wanted to be the person to beat the odds.”

February 24 was the day she went under the knife, with one final stark warning from James Calder ringing in her ears.

“He came into me that morning in the room. He’d never said it to me as bluntly before but he said, ‘you know you may never play professional football again, Megan?’

“And I was, like, in an hour you’re about to cut open my ankle and you’re telling me this now? (laughs). But I was in good hands. And the surgery was a success.”

Then, just three weeks into the start of her recovery, Britain shut down in the grip of the coronavirus pandemic. Under such abnormal circumstances, she counts herself fortunate to have been able to avail of Man City’s high medical standards.

“For the first few weeks, before lockdown, the physios and doctors were able to visit my house, see the scar, see the wound, and make sure it was all healing. And then as soon as isolation kicked in, we jumped straight to Zoom calls, Teams meetings, and Facetiming for rehab sessions.

“Everybody is in contact to make sure I am where I need to be right now in the recovery process. And they’re really happy with my progress, I’m not behind in anything.”

She is acutely sensitive to the irony that something as grave as the pandemic has had one notably beneficial effect on her latest experience of recovery from serious injury.

“It’s hard to look at something so serious and have any positive outlook on it but my only thing was, ‘I’m not missing any football right now and this gives me the opportunity to focus completely on my rehab and have no distraction’.

“And mentally it also makes it a bit easier because you know you’re not missing out on stuff, like seeing the girls training and playing on the weekend.

I know people are dying from the virus and that it’s such a serious thing – and thank god for all the great people out there doing great work for us – but that’s the one positive I was able to take from this situation.

In fact, there’s another: the postponement of the Euro 2021 finals to the following year means that, all continuing to go well with her recovery, she has more time in which to catch up with Ireland’s qualifying campaign, having played her last game in a green shirt in the 3-2 win over Ukraine in October, which was manager Vera Pauw’s first game in charge.

“Fingers crossed, I won’t miss out on any more internationals,” she says.

“It would obviously be a phenomenal thing for sport in Ireland in general but especially for the women’s football team because we’ve never qualified for a major tournament.

“To be part of the first team to do it would be something you could never, ever forget. It’s a big goal of mine to get back playing but it’s an even bigger goal to be part of that.”

She is now two-and-half months post-op and while she accepts she still has a long way to go – and acknowledges that some days are much harder than others – she is determined to give it everything she’s got, both mentally and physically.

“I’m a lot more open to life, not just football,” she reflects.

“I think I’m a lot more positive in everything I’m doing. Yes, bad things might happen but if I hold on to all those negatives I’ll never get anywhere in life.

“So I’ve got to let it go, put my head down and work hard, and hopefully soon I’ll be back on the pitch again. I’m not going to give up that easily. Definitely not.”

And any worries that the famous long throw might be a bit rusty when she does come back?

“I spent 15 months out with my knee and it was still as long as ever,” she concludes with a laugh.