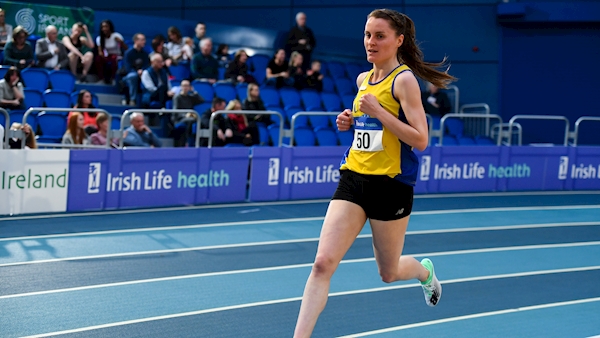 Scintillating, thrilling and full of potential – Ciara Mageean has moved considerably closer to Sonia O’Sullivan’s long-standing Irish women’s mile record by carving three-and-a-half seconds off her lifetime best in Monaco, in a race where the vintage world record was smashed by Sifan Hassan.

Mageean reduced her Northern Ireland record by a whopping 3.37 seconds to 4:19.03 in finishing eighth as the Herculis Diamond League meeting witnessed that remarkable new world record.

Nine PBs were set and four national records set (not including Mageean’s new NI one) as Hassan rocketed to a new mile mark of 4:12.33 – 0.23 seconds inside Svetlana Masterkova’s 1996 landmark run.

Bronze-medallist over 1500m at the last two World Championships, the Dutch athlete dragged the rest of the field with her in terms of impressive times, with second-placed Laura Weightman 0.03 outside the British record in finishing five seconds down on Hassan, who collapsed on the track before being congratulated past the line by her controversial coach Alberto Salazar.

Mageean’s new PB pts her within two seconds of O’Sullivan’s Irish record of 4:17.25 set at the 1994 Bislett Games, and is the second-fastest time ever run by an Irishwoman, beaten only by that sole O’Sullivan performance.

The twice European-medallist went through 1500m in 4:01.30 – taking 0.16 off her previous best at that slightly shorter distance, and was third-fastest European in the field.

Mageean was the only Irish athlete competing on the night in Monaco.

The race – over a distance not run by women anywhere near as much as men – was held in memory of American middle-distance champion Gabe Grunewald, who passed away in June.

One of four world leads on the night was clocked in the men’s 800m as Nijel Amos claimed a meeting record of 1:41.89 – his fastest time since claiming Olympic silver behind David Rudisha’s world record at London 2012.

In the men’s 3000m steeplechase, Soufiane El Bakkali of Morocco trotted around in 8:04.82, and in the field, a shock new Polish national record of 6.02 metres saw Piotr Lisek record the best pole vault of the year to date.

Meanwhile, a day after Marcus Lawler’s bronze-medal-winning performance in the 200m, Ireland’s Kate Veale came home 20th in the women’s 20k walk at the Universiade in Naples.

Ciara Neville was fifth in the women’s 100m final at the European Under-23 Championships in the Swedish city of Gavle.

A joint season’s best of 11.57 seconds was just 0.12 of bronze, as ace Pole Ewa Svoboda was ordained European champion again in 11.15.

It was Scott’s second lifetime best of the day as over the 100m hurdles, the Carlow sprinter racked up a new achievement in bowing out in the semis in 13.59 seconds – 0.02 behind Sarah Quinn’s new PB of 13.57 as the Irish duo finished 12th and 13th.

John Fitzsimons has qualified for the men’s 800m final, and Sharlene Mawdsley to the women’s 400m decider after an impressive 53.26 to progress sixth-fastest, just like Fitzsimons – Irish team-mate Sophie Becker missed out by one place in ninth overall with 53.67.

Stephanie Cotter will be competing for 1500m glory after recording a time of 4:25.74 to go through eighth-quickest for the Gavle climax.

Mark Smyth set a new personal best of 21.29 seconds in qualifying for the 200m semi-finals.

Brian Fay was ninth-fastest qualifier for the men’s 3000m steeplechase decider in 8:56.63, but Paul O’Donnell was eliminated.

Niamh Fogarty was seventh in the women’s discus final – her mark of 51.57m was five metres off the medals as Croatia’s Marija Tolj grabbed gold with a throw of 62.76.