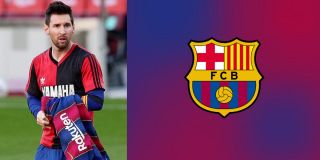 Lionel Messi and FC Barcelona have both received fines from the Spanish soccer federation after the Barcelona striker removed his shirt to pay tribute to the late Diego Maradona.

The incident happened when Messi removed his shirt following his goal in Sunday’s 4-0 win over Osasuna to reveal a Newell’s Old Boys jersey with the No.10 on the back as a mark of respect to Diego Maradona who had sadly passed away just days before.

A moment for eternity. pic.twitter.com/nZt2LLfg1r

The Spanish soccer federation’s competition committee showed little leniency when upholding the rules citing article 93 of the disciplinary code which states ‘that a player should be punished for removing their shirt when celebrating, irrespective of the motive.’

A statement from the federation also added that ‘Messi could only have had the sanction waived if he had been given the booking in error.’