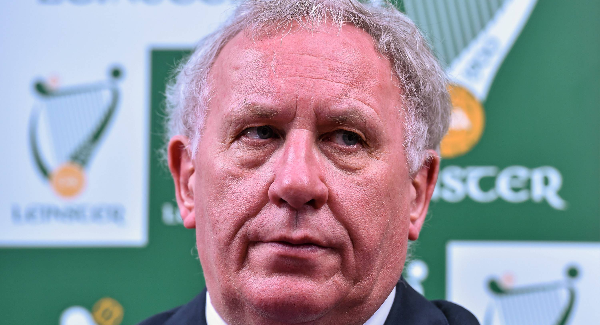 In his annual report, Reynolds admits he would like to see a round-robin section for Leinster’s Division 3 and 4 teams added to the current structure before they take on Division 1 and 2 counties in the knock-out stages.

That is similar to a proposal put forward by GAA president John Horan in his time as Leinster chairman, which was narrowly defeated at Congress.

However, it’s Reynolds’ support for restructuring the senior football championships, which will attract most interest.

“Yes if we could have a blank canvas we would more than likely go with four regions of eight counties each. However, this would not necessarily result in equal population basis.

“Such a divide could be well suited to football but hardly for hurling!

“Reference is made from time to time of vested interests by the provincial councils.

“This charge at the provinces does not reflect the reality – provinces exist because the counties (to date) want it that way. There is much more to a provincial council than inter-county championships.

“I suggest that for our province a round robin format for counties in Division 3 and Division 4 prior to joining the Division 1 and 2 counties in the Quarter Finals is worth consideration.

“It is only a few short years ago that such a motion at Congress had significant support just failing to get the needed requirement of two- thirds.

“Why not examine the feasibility of having the said structure for 2021?”

Reynolds highlights the difficulties counties will face later this year in completing their club championships in time for the provincial competitions.

“The decision to bring forward the All-Ireland Club Championships creates concern for a number of counties.

“Some counties are now of the belief that they will struggle to finish their own championships in time. This is a legitimate concern.

“However, one possible solution could be the moving of some games to finish on the day.

The removal of possible replays at certain stages would give a concrete (barring weather) finish time to all Championships.

“If we wish to move towards a more certain fixtures calendar then this is one nettle we all need to grasp.”

Like his Ulster equivalent Brian McAvoy, Reynolds also has worries about the timing of the U20 football championship, which returns to a spring start next month.

“The U20 Inter County Competitions or rather the uncertainty around the same continue to cause problems at club level.

“Providing adequate games at a suitable time of the year is always a struggle. This is made increasingly difficult when second level and third level begin to be taken into account.

“Until this is rectified in a concrete manner these struggles will remain in place.

“The use of April as a club is having a mixed reaction. Most counties, to their credit, are using the window to provide league activity.

“However, the lack of willingness to start Championships here may be one of the reasons counties struggle to finish in time. The gap between this and the concluding stages of the championships is the abiding issue.

“Fixtures remain a consistent issue within the organisation. I often question whether there will ever be a programme that there is consensus on.

“I doubt there is but we must continue to make improvements where we can.”