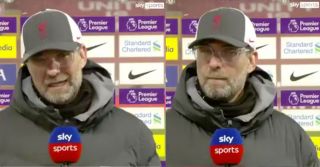 Liverpool have now had five home straight defeats and awful stat and one that the Champions of England won’t like looking at, but unfortunately that is where this Liverpool team currently lie at the moment. Liverpool just can’t seem to score goals and have lost their grove from last year.

🗣️ "The details decide these game and they are going against us. We are responsible for that."

Jurgen Klopp was left frustrated by Liverpool's performance in both boxes against Chelsea pic.twitter.com/CQIKVmINVO

Liverpool are now seventh in the table four points behind Chelsea and look a long way off qualifying for Champions League football for next season. You know you’re in trouble when your taking your top goal scorer Mohammed Salah off after sixty minutes.

Will Liverpool get into that all important top four spot now and qualify for Champions League football? As time goes on it looks more and more unlikely and Jurgen Klopp and his men need to find their form asap.

Jurgen Klopp did give massive praise to Chelsea’s Mason Mount though calling him a ‘special player’ if England don’t win a International tournament at some stage with the young quality they have coming through, there is something seriously wrong.