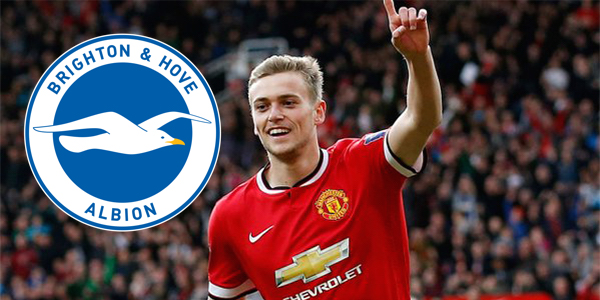 Brighton & Hove Albion have completed the loan signing of Manchester United and England under-21 striker James Wilson until the end of the season.

The 19-year-old, who turns 20 on 1st December, will train with his new team-mates for the first time tomorrow morning, and will be available for the weekend visit of Birmingham City to the Amex.

Manager Chris Hughton commented, “We have been keen to add a striker, and James has been our number one target for some time, so we are absolutely delighted to have completed the deal.

“James is an exciting young striker, and we hope that this move will prove to be very good for all parties involved.

“He is very highly thought of at Old Trafford and he has been in and around the first-team picture at Manchester United since Ryan Giggs gave him his debut the season before last.

“There was a huge amount of competition from rival clubs to sign James on loan and it has been another great team effort to secure his signature.

“I now hope he will help us maintain our excellent start to the season, and bring additional goals to the squad.”