The former Ireland underage player Jack Grealish was at the centre of the controversy last night during Atletico Madrid vs Manchester City in the quarter-finals of the Champions League in the Spanish capital. Atletico Madrid and Montenegro defender Stefan Savić decided to pull the England midfielder’s hair which kicked off all sorts of shoving and pushing. 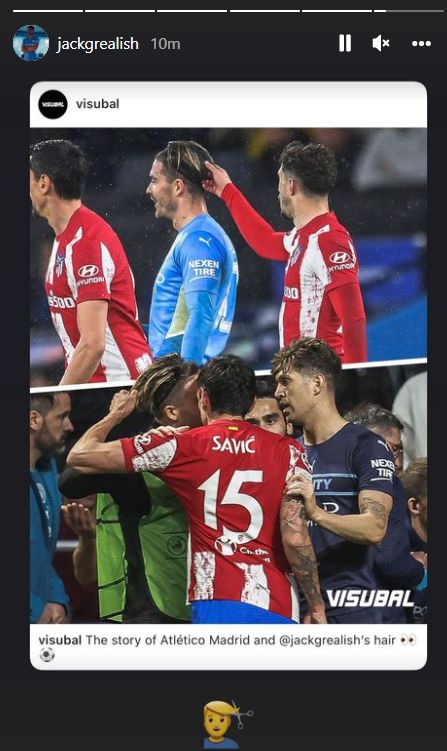 Manchester City managed to advance to the next round and will we see the leaders of the Premier League, make it all the way to the final? Their next match won’t be easy against the giants of the competitions Real Madrid.

More Stories Atletico Madrid Champions League jack grealish Manchester City Stefan Savić
Jack Grealish is Having One Hell of a Time at Harry Maguire’s Wedding as He Party’s in his Underwear
Jun 27 2022, 19:48
Football
Andy Robertson Join Jack Grealish in Vegas for ‘Wild’ Pool Party
Jun 20 2022, 8:41
Football
Jack Grealish is Having One Hell of a Summer as he Parties Long Into the Night in Vegas
Jun 19 2022, 9:23
Football
Arsenal Are Getting Closer & Closer to Signing Brazilian Star
Jun 16 2022, 18:58
Football
Diego Costa Rips Into a Verbal Attack on his Former Club
Jun 4 2022, 13:32
Football
Klopp: “I LOVE YOU ALL! I’m not drunk, just emotional.”
May 30 2022, 11:41
Football
Andy Robertson Slams the Treatment of the Liverpool fans prior to kick-off
May 30 2022, 10:05
Football
Liverpool Fans Left Stranded as the Bus Fails to Turn up – Every Cloud
May 29 2022, 14:06
Football
Michael Owen Took a Hammering on Social Media Last Night
May 29 2022, 5:36
Football
Thibaut Courtois takes aim at Liverpool in post match interview
May 29 2022, 5:16
Football