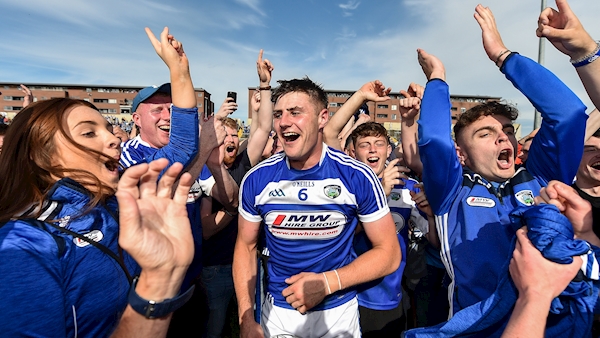 Laois’s victory over Dublin has sent shockwaves through the hurling world.

A shock to go in the annals of hurling alongside Antrim beating Offaly in ’89 and Kerry defeating Waterford in ’93, the victory sparked a joyous pitch invasion at O’Moore Park.

“I’ve never witnessed anything like what was at the final whistle,” said midfielder Paddy Purcell. Judging by the scenes captured at the game, he wasn’t wrong.

The victory came a week after Laois’s Joe McDonagh Cup success. The celebrations after that game certainly did no harm to them yesterday, so another celebration was in order.

Ross King and Jack Kelly even picked up famous hurling fan Buff Egan on their way out of O’Moore Park and invited him along to their post-match meal.

You can relive the “shock of the year” stoppage time drama as carried by Midlands 103 from the 1:16:00 mark below:

The victory was celebrated in style with dyed-in-the-wool supporters.

It was hailed near and far, from the honorary Laoismen in the backroom team…

…To the many proud Laoismen celebrating at home and abroad.

Laois had been overlooked in advance to the point of one bookmaker releasing odds for a Dublin v Tipperary quarter-final.

There were too many heroes to mention them all…

Next week it’ll be Laois-Laois-Laois v Tipp-Tipp-Tipp in the stands.

Laois can continue to dream.