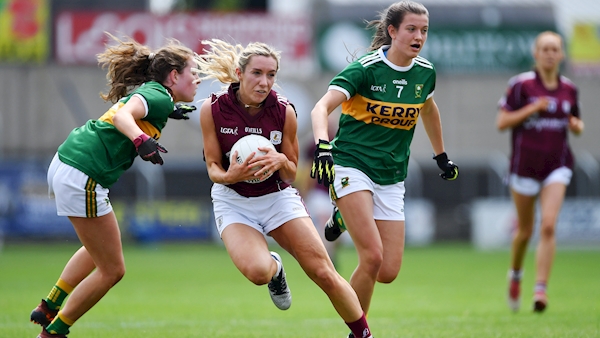 Galway came from behind at O’Moore Park in Portlaoise to secure a hard-earned victory over Kerry in Group Three of the TG4 All-Ireland SFC.

Trailing 1-8 to 0-1 after just 20 minutes, the Connacht champions proceeded to register an astonishing 1-11 without reply either side of half-time. Skipper Tracey Leonard was magnificent throughout, bagging an impressive personal tally of 0-7 for the winners.

While Kerry can take plenty of encouragement out of their blistering start to the contest, they will need to defeat Westmeath in a fortnight’s time to keep their quest for the Brendan Martin Cup alive.

After Louise Ni Mhuircheartaigh broke the deadlock with an early free, Beaufort’s Houlihan added a brace of points to offer the 11-time champions an early foothold. Lorraine Scanlon, Hannah O’Donoghue and Anna Galvin were also on target, before Leonard finally opened her side’s account on 17 minutes.

This was only a temporary respite for the league finalists, who subsequently fell 10 points adrift when O’Donoghue rattled the net at an acute angle.

Galway had struggled to break down a rigid Kerry rearguard, but finally came to life during a powerful end to the first half. Leonard’s two-point salvo injected fresh life into their challenge and they then grabbed a goal of their own through midfielder Louise Ward.

Indeed, courtesy of Leonard’s growing influence, they reduced their deficit to three points (1-8 to 1-5) in time for the interval. The Tribeswomen were beginning to find a more familiar rhythm and, within seven minutes of the restart, they had wiped out the previously comprehensive Kerry advantage.

Supplementing an outstanding Aine McDonagh effort, the elusive Leonard ramped up the pressure on the Kingdom with two points in quick succession. 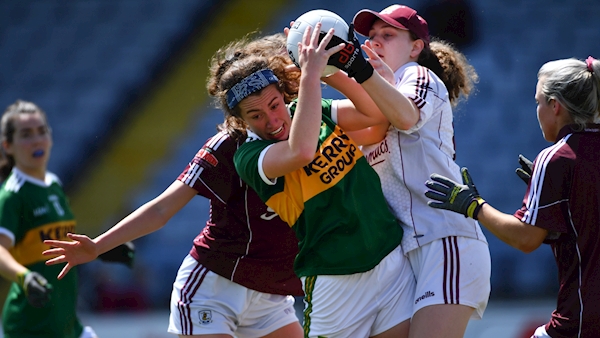 Mairead Seoighe’s first of the day then edged them in front on 38 minutes – preceding impressive scores for substitutes Sarah Conneally and Roisin Leonard. Another McDonagh special propelled Galway into a four-point cushion, but Kerry eventually ended a lengthy barren spell with a Houlihan free on the third-quarter mark.

A point for Rathmore’s Danielle O’Leary brought them a step closer, but with Megan Glynn firing over a brace of late points, Tim Rabbitt’s men ultimately prevailed.