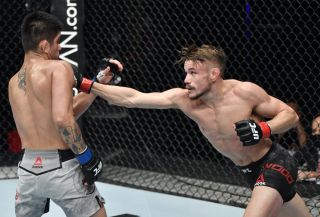 UFC Bantamweight Nathaniel ‘The Prospect’ Wood has opened up about his razor thin loss to Casey Kenney in October but has insisted he remains committed to breaking into the division’s top 10.

Wood, 27, currently boasts a 17-5 record with four wins coming in the illustrious UFC.

The talented mixed martial artist who broke onto the scene through CageWarriors has gone on to emerge as one of the brightest talents to come out of the United Kingdom in recent years.

Wood, who boasts a classic well-rounded fighting style has endured a tough 12-months after three fights since February have seen the Englishman lose twice (John Dodson and Casey Kenney).

However, with the Englishman’s razor thin defeat to Kenney coming via the judge’s scorecards, Wood feels like his result at UFC 254 was harsh.

Speaking exclusively to Benchwarmers, Wood has admitted that he felt he was the better fighter on the night.

“I don’t feel my last fight was a loss but it’s MMA and sh** happens,” Wood admitted. “All I can do is bring my A-game and do the best I can.”

When asked who the 27-year-old is eyeing a match-up with in 2021, Wood said: “No particular opponent in mind.

“I would just like to fight whoever the UFC need me to fight to get in that top 10.”

Speaking about the tough times sport has recent endured due to the ongoing COVID-19 pandemic, Wood sent a heartfelt message to fans who have stayed loyal to the sport’s top-tier promotion.

European fans have had a particular tough time in the last 12-months after the UFC was left with no choice but to operate their fight cards throughout the night from Nevada’s Apex complex.

“Stay with the sport,” Wood urged. “The UFC has kept the show running and when they come to England, we can expect one hell of a card.”

Wood’s next match-up is still unknown but fans of ‘The Prospect’ can certainly feel excited by his clear ambition to bounce back stronger as he refuses to give up on his top 10 ambitions.