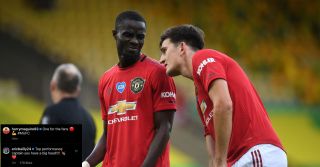 Manchester United won out two gaols to nil winners today away at the Etihad Stadium against cross city and bitter rivals Manchester City. The City of Manchester is defiantly red tonight, what a result that was for Manchester United. Ole Gunnar Solskjaer is doing a good job with the Red Devils and there’s going to come a stage where he will have to do an excellent job in delivering trophies at the Old Trafford club.

That’s surely Manchester United cemented in the Champions League spots. If Manchester United could pick up a trophy and finish second in the league that would surely been seen as a relevant success for United fans and next year will come the real test.