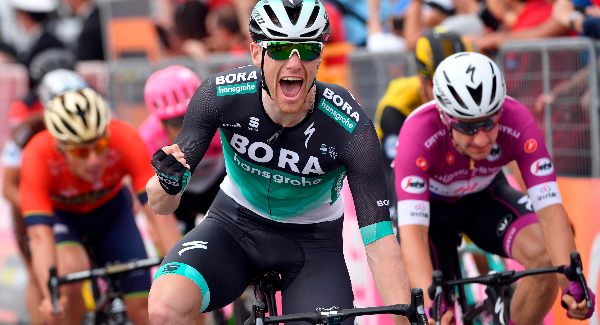 Sam Bennett has completed his move to Deceuninck-QuickStep a month after cutting ties with Bora-Hansgrohe.

The Carrick-on-Suir sprinter has signed a two-year contract with his new Belgian squad, where he replaces Italian Elia Viviani, and will hope to earn selection for cycling’s biggest races.

“I am delighted to get to sign with Deceuninck–QuickStep, the team I had a poster of on my wall when I was a kid,” Bennett said.

“I remember going to a race with An Post and seeing Quick-Step at races and I was intimidated by such a big team.

“I never thought I would be good enough to sign for them, so to be able to say that I am riding for them is a dream come true and I can’t wait to get to work with the guys and start working and racing with them.”

Bennett’s move to Deceuninck-QuickStep has long been anticipated but was held up by a contract dispute with Bora.

He was keen to leave the German team as a free agent after missing out on selection for both the Giro d’Italia and Tour de France in 2019, but found himself in a legal wrangle after reportedly signing a letter of intent to stay in May.

Deceuninck-QuickStep CEO Patrick Lefevere said: “The protracted nature of Sam’s move has been well documented but I am delighted to have him on board.

“His palmares alone speaks volumes about his talent and determination, but he is also a great character and another leader to have around the team. We all cannot wait to start working with him.”

Bennett enjoyed a breakthrough year in 2018 with three stage wins on the Giro, and added to his Grand Tour tally with two victories in this year’s Vuelta a Espana, taking him to 13 victories overall in 2019.