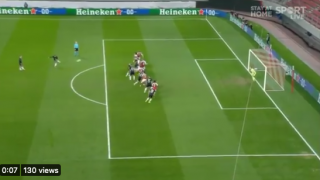 What a goal from the Portuguese star, this is sheer quality off the right foot into the top left corner of the net, good not hit it sweeter and his first goal from the club and what a first goal. Diogo Goncalves has obviously been practicing that on the training ground and practice makes perfect as you can see below.