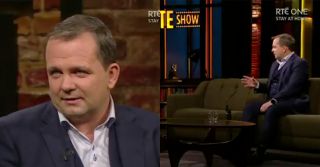 The Wexford manager was on The Late Late Show last night on RTE One talking to host Ryan Tubridy about the online abuse and bullying he receives and his father has received over the past four or five years. particularly in his time with Clare.

The man from the banner has gone on to have a successful time as a hurling manager having won an All-Ireland with his native country in 2013 and done a good job with Waterford and doing a fine job with Wexford at present. But you’d have to wonder what type of people are there out there on keyboards and would they be as brave if they had to say it to Davy Fitzgerald’s face. Cowards is what they are!

"To tell you the truth, it's been tough."

Davy Fitzgerald on the online abuse he and his father are subject to.#LateLate pic.twitter.com/8L1QnEUQKf

Davy Fitzgerald played in goals for Clare in that famous Clare team of the 1990’s that won two All-Ireland’s in 1995 and 1997 and continues to stay involved in the game and still has the love for hurling.