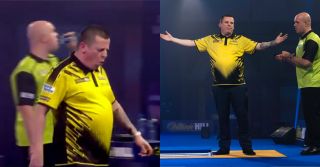 Dave Chisnall has ended a 27 game losing streak with an emphatic 5-0 demolition of world number one Michael Van Gerwen.

Chisnall pulled out all the stops as he dismantled the world champion Michael Van Gerwen in the world darts championship quarter-finals.

The world number eight put on an extremely impressive display to beat the tournament favourite Van Gerwen and has booked himself a place in the semi-finals.

Dave Chisnall produces the biggest win of his career WHITEWASHING the world number one Michael van Gerwen 5-0 to reach the semi-finals of the William Hill World Darts Championship!