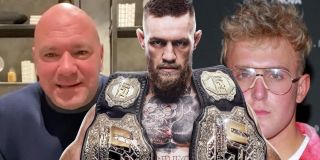 Dana White has finally responded to Jake Paul’s recent callout of Conor McGregor and himself by simply saying he’ll let Amanda Nunes “knock his ass out.”

Paul went on a tirade on social media in an attempt to goad McGregor and White into a hyped-up exhibition fight.

Nunes is currently UFC bantamweight and featherweight champion and when news of the potential fight crossed her path she responded on Twitter with a simple: “I’m in!”

Paul claims his team sent McGregor an offer of $50 million for a boxing match which has yet to be confirmed. The YouTuber then went on a personal attack of McGregor and his fiancée Dee Devlin calling here “a four.”

“Good morning, Conor McGregor. I know you’re probably beating up old dudes in a bar right now, or maybe you’re jacking off because you’re sick of f**king your wife.

“I mean, she’s a four, Conor. You could do a lot better. But happy Monday.

“My team sent you a $50 million offer this morning – $50 million contract (with) proof of funds – the biggest offer you’ve ever been offered, but you’re still scared to fight me, Conor.”

Conor McGregor is currently preparing for his fight against Dustin Poirier at UFC 257 and has yet to respond to the insults.