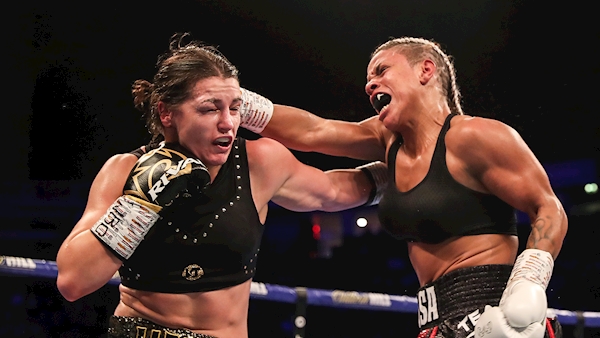 It’s been clear for a long time now that the iconic Katie Taylor holds a special place in the heart of the general Irish public, and her latest achievement – becoming a two-weight world champion in Manchester last night – saw another outpouring of love for the sporting star.

Taylor became the third Irish boxer to hold belts in two weight divisions after her points victory over Christina Linardatou in the WBO super lightweight title fight, following in the footsteps of Steve Collins and Carl Frampton before her.

The Bray boxer thanked supporters after the fight and her many supporters on these shores have responded in kind.

Twitter was lighting up throughout the night with praise for Ireland’s latest sporting hero, with other sporting stars like Irish international footballer Katie McCabe and former international Kevin Kilbane among those to pay tribute to Taylor.

Fellow boxer Carl Frampton hailed Taylor as a role model, saying “a better role model would be hard to find”.

Sporsfile were on hand in Manchester to capture the historic achievement:

In a case of game recognising game, fellow Irish sporting hero Paul McGrath was also full of support for Taylor.

From her hometown of Bray, it was clear that the Wicklow town’s favourite daughter didn’t lack for support:

The demeanour and behaviour of Taylor throughout her career also drew plenty of praise – and some comparisons to other sports stars.

We can only hope that Taylor’s next fight takes place on these shores!