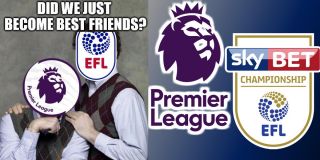 The Premier League and English Football League (EFL) have agreed a rescue package amounting to £250m to help with the financial strain that EFL clubs are facing due to the coronavirus pandemic.

The Championship will receive a £200m loan while a £50m grant has been agreed for League One and League Two clubs.

The Football League accepted the £250m rescue package which will see League One and League Two clubs given immediate grants to help them survive the financial impact of the Covid-19 pandemic.

The deal was approved at a Premier League shareholders meeting on Thursday after months of government pressure asking the top Premier League clubs to do their bit for the sake of the game in the UK.

The Premier League has also agreed to provide a payment commitment of up to £15m to cover other fees to allow the EFL to secure a £200m which will result in Championship clubs receiving their loans interest-free.