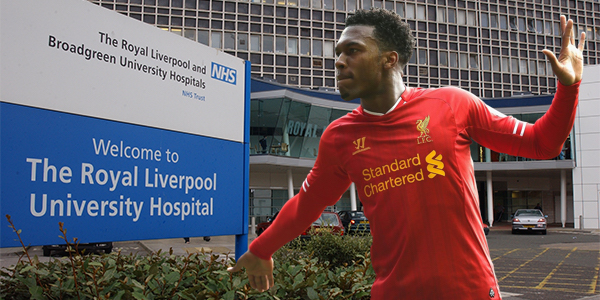 The Royal Liverpool University Hospital have made a sensational bid for Liverpool and England striker Daniel Sturridge.

The bid comes after the Premier League star injured himself once again ahead of Liverpool’s Europa League game tonight.

Sturridge has played 70 times for Liverpool and has been out injured on 68 occasions making him one of the Premier League’s most injury prone players.

“We’ve been monitoring Daniel for some time now and we believe he’ll be the perfect addition to our team. We have everything he needs here. Bandages, plaster, X-ray machines and doctors on call 24hrs.” said Dr.Hammat, Chief Surgeon at the Royal Liverpool University Hospital.

The fee for Sturridge’s sensational move is undisclosed but is believed to be somewhere in the region of £30 per month which covers basic health insurance costs in the UK.

Should Sturrdidge get injured again that fee is expected to rise to approximately £45-£100 per month, depending on the injury.

“I am so happy for Daniel. He’s going to where he belongs. It was only a matter of time before he listened to his heart, which has not stopped yet I believe” said Liverpool manager Jurgen Klopp.

Sturridge is in the Royal Liverpool University Hospital this evening having a scan his foot and he is expected to sign later on tonight if none of his fingers break.

He will return home via Ambulance tomorrow morning to begin his rehabilitation before his first start against Liverpool University Dental Hospital early next week.