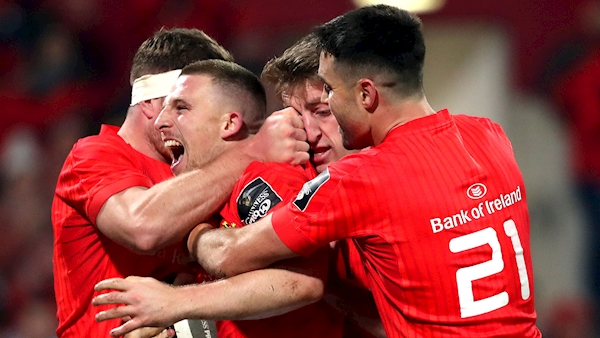 Andrew Conway provided a match-winning try of real class as Munster battled past Ulster in a 22-16 Guinness PRO14 derby win at Thomond Park.

Conway, one of eight returning Rugby World Cup players for the hosts, accelerated clear from just inside halfway to raid in under the posts and split the provincial rivals in the 64th minute.

Tries from CJ Stander and man-of-the-match Rory Scannell helped Munster to carve out a 15-6 interval lead with Ulster’s talisman John Cooney kicking their six points from the tee.

Winless in Limerick since 2014, the Ulstermen edged ahead thanks to captain Rob Herring’s 49th-minute try off a lineout maul amid a promising 10-point spurt.

But Conway’s superb seven-pointer got Munster back on track as they kept up with the pace in Conference B.

With both sides eager to keep up their winning momentum ahead of the start of Europe, it was Cooney who kicked Ulster ahead from close range in the third minute.

The visitors had a let-off when Jacob Stockdale’s clearance kick bounced off Conway and they coughed up a five-metre scrum.

However, the set-piece platform was duly turned into seven points by Munster who had centre Scannell and Alby Mathewson both go close before Stander muscled in under the posts.

JJ Hanrahan’s conversion was followed by a Cooney penalty at the end of an evenly-contested first quarter.

Both defences were proving difficult to break down, and it was errors which were mainly leading to scores. Hanrahan punished an Ulster penalty with three more points at 10-6 before his evening was disappointingly cut short through injury.

A Martin Moore spill ruined a slick Ulster move, and it was Munster who pushed on as half-time approached.

They trucked it up through the forwards and Mathewson, who was a busy figure throughout, before some great hands from replacement Tyler Bleyendaal and Chris Farrell allowed Scannell to plough over near the left corner.

Bleyendaal’s conversion bounced back off the post and the deficit for Ulster remained at nine points despite some mishandling from Matt Faddes and Angus Curtis, who made his first start at fly-half. Collectively, Dan McFarland’s men were an improved force on the restart.

Munster captain Peter O’Mahony stole two early season half lineouts, yet his Ireland colleague Herring sparked the best out of Ulster when breaking from a maul, ten metres out, and evading Bleyendaal’s tackle to crash over to the right of the posts.

Cooney converted and also punished Stander for going off his feet in the 57th minute, booting Ulster back in front at 16-15.

Bleyendaal converted for a six-point cushion, and while Ulster had enough possession to fashion a response, they were starved of territory late on.

Bleyendaal missed a long-range penalty before his pass was intercepted by Stuart McCloskey, but his opposite number Scannell quickly shut down the attack with a crucial tackle.