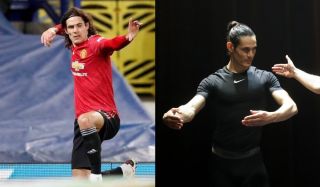 Manchester United striker Edinson Cavani has been taking ballet lessons in a bit to prolong his career as he enters the latter stages of his football life report the Sun.

The veteran striker took up the art form to help increase his mobility, strength and flexibility by putting himself through the paces through dance.

The 34-year-old joined up with the Ballet Nacional de Sodre in Uruguay after being released by PSG last year.

The lessons seem to be paying off now as the Uruguayan has bagged seven goals so far for Ole Gunnar Solskjaer this season and he looks fresh as ever.

Cavani is currently on a season long loan with the Red Devils who are said to be in the hunt for a new striker or they may offer the Uruguayan another year at Old Trafford.

Cavani missed United Europa League tie with Real Sociedad this week but is available to take on Chelsea this Sunday.

Thomas Tuchel’s men will be hoping that the 34-year-old can keep his twinkle-toes away from the ball side the box as the Blues aim to keep their current winning form going.